In this buying guide, we’re going to be looking at three garage vacuums. These are garage vacuums that you mount to the wall in your garage. And then, when they’re mounted, you connect the nozzle that you’re going to use, and you start vacuuming!

When you’re finished reading the guide and learning about what these garage vacuums have to offer, you’re going to have a pretty solid idea of which garage vacuum is the very best one for you!

What Does The VacuMaid GV30 Have To Offer?

When you’re setting up the VacuMaid GV30, you’ll find that it’s very easy to do so. VacuMaid gives you all of the tools and materials that you need. And, when you are mounting it, you’re going to be mounting the main tank, which includes the motor as well the bag that holds all of the stuff you’re vacuuming up.

Within this tank, there is a bag. This bag can hold seven gallons of material, and consists of five different HEPA-Layers, which are used to break down and filter things like dirt, dust, and a variety of other allergens and nasty particles.

With all of these tools, it’s extremely easy to vacuum up everything that needs to be vacuumed up. Every tool is easy to attach to the main hose, and they all work well.

When these tools are combined with the motor, which provides a tremendous amount of suction that can make quick work of any mess that you’re dealing with, this leads to an extremely easy and pleasant vacuuming experience.

If you’re looking for an excellent garage vacuum that is affordable, easy to install and use, and very powerful, then the VacuMaid GV30 is a truly fantastic choice!

What Does The VacuMaid GV50 Have To Offer?

For example, if you look at the design and aesthetic, it’s the same. And, when you picking up the tank, you’ll notice that it weighs the same, and that it has the same seven-gallons of capacity, and the same five-layer HEPA system.

With that being said, though, this doesn’t mean the VacuMaid GV50 doesn’t offer anything new. Because, it does offer one new design attribute that is incredibly useful. And this design attribute is that the hose is no longer thirty-feet, it’s now fifty-feet.

With the fifty-foot hose, you can move a lot farther throughout your garage, and the spaces outside of your garage, then you are with a thirty-foot hose. This greatly enhances the mobility and flexibility that you have, and it makes the overall vacuuming process a lot easier especially if you have a large garage where there are lots of little nooks and crannies that you wish to vacuum.

When it comes to using this vacuum, you have access to the same cleaning tools as the VacuMaid GV30. Nothing is different in that aspect, and the same goes for the cleaning power. Using the motor, you have access to a ton of suction power, and this suction power gives you the ability to clean whatever is in your path, in an easy and efficient manner.

What Does The VacuMaid GV50PRO Have To Offer?

Right off the bat, you’ll notice that the VacuMaid GV50PRO is not only more expensive than the GV50, but it’s also a lot larger.

Here’s the thing about the VacuMaid GV50PRO Central Vacuum: it’s an incredibly powerful garage vacuum that offers many of the same general features and design traits as the GV50, but it improves upon that basic design with a larger motor that gives you more overall suction power.

When you’re setting up the central vacuum, you’ll have an easy time. It’s heavier, but all of the mounting tools are there, and it’s an easy process.

When you’re using the vacuum, you’ll also have a very easy time. Just like the GV50, the hose is fifty-feet long. With this long hose, it’s much easier to vacuum in spaces that are further away from the vacuum, or away from the garage itself.

As with the previous two vacuums, you have access to a telescopic wand, floor tools, and a crevice tool. These tools are easy to attach to the main hose, and they deliver a very pleasant and enjoyable vacuuming experience. There aren’t any differences in that aspect, when compared to the previous vacuums.

What you will notice, though, is that vacuuming is a lot easier and a lot faster. This is an incredibly powerful and strong vacuum that provides a tremendous amount of suction power. No matter what you’re vacuuming up, you’ll have an easy and enjoyable time doing so.

As dirt, dust, and debris you vacuum up flows through the hose, it falls into a seven-gallon tank. This tank has five layers that serve as HEPA filtration, and they function in the same way that they do the previous vacuums.

OVO
Up To 9000 Sq Ft Area
The OVO Hybrid Filtration System allows you to use your unit with or without disposable bags. The cyclonic filtration combined with the permanent machine washable filter purifies air particles and can even reduce allergy symptoms and respiratory problems.
Check Latest Price
"Budget" Pick

Nutone PurePower 7001
Up To 10000 Sq Ft Area
Designed with Ultrasilent Technology which combines sound absorbing materials and assembly techniques to offer one of the lowest noise levels in in the industry. Deep cleaning has never been so peaceful!
Check Latest Price

A central vacuum cleaner (also known as built-in or ducted) is a type of vacuum cleaner appliance, installed into a building as a semi-permanent fixture. Central vacuum systems consist of a power unit that is usually mounted in the utility room, garage, or basement of a home 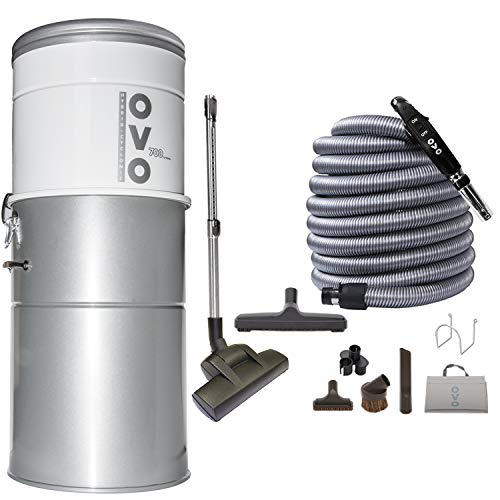