Vacuum cleaners are getting smaller and smaller. And, there’s a very good reason for this: people want smaller devices. People want devices that are small and compact, and they want to be able to hold those devices in one hand, and to move them around with ease.

A stick vacuum cleaner is a tall vacuum, and it stands upright. But, it’s very different from an upright vacuum, because it weighs very little, and it’s designed in a way that allows you to hold it in one hand, so that you can move it around freely.

Most stick vacuums aren’t able to match the performance of an upright vacuum. This is unfortunate, but true. However, they are getting closer and closer to fulfilling that, and soon enough, stick vacuums may be some of the most powerful vacuums on the market.

What Does The Tineco A10 Hero Offer?

The Tineco A10 Hero weighs five-pounds. When you first look at the Tineco A10 Hero, you’ll notice that it has a very slick and compact design. Holding the vacuum feels good, and since it doesn’t weigh much, you can easily move it from place to place. 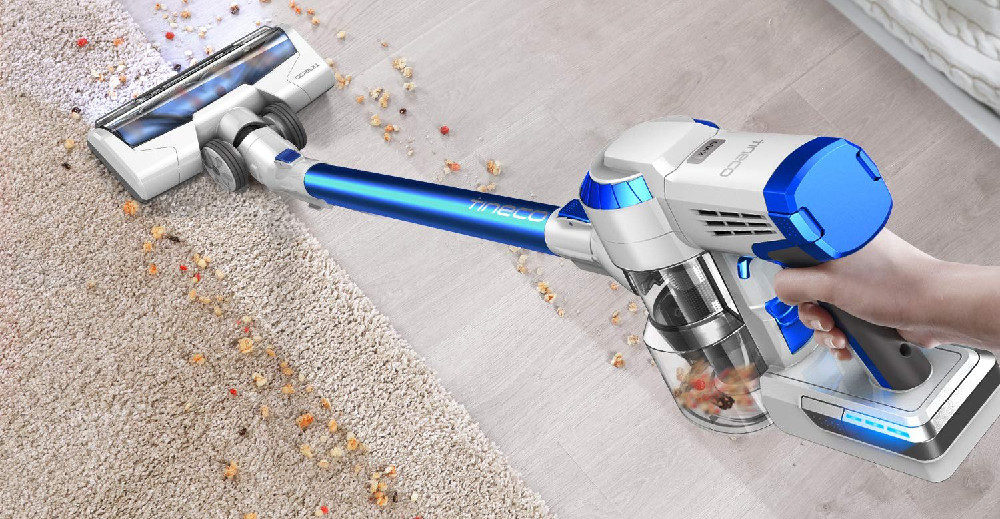 If you are vacuuming in a small apartment, to give you an example, then you aren’t going to have any problems. This is a very lightweight stick vacuum. But, sometimes, you need to clean in a space that is especially small, and you just can’t fit the main stick vacuum into the space. When that happens, just press a button, and you can turn the Tineco A10 Hero into a handheld vacuum.

Using this handheld vacuum, you will have less suction power, but it’s a lot easier to maneuver the vacuum cleaner. You can push the handheld vacuum underneath furniture, in between random objects, and into many different spaces.

When it comes to suction power, the Tineco A10 Hero is one of the most powerful stick vacuums available. You can use the Tineco A10 Hero to vacuum on all kinds of different surfaces. Whether it’s a hard floor, a soft floor, or upholstery, the Tineco A10 Hero allows you to vacuum those surfaces in an easy and quick manner. This is accomplished using not just the suction power, but also the brush. The brush is a torque brush that moves quickly, in patterns that allow the dirt and dust on any surface to quickly loosen up, so that they can then be sucked into the vacuum cleaner and disposed of.

The Tineco A10 Hero uses a four-stage filtration system. This filtration system is great, and it ensures that the dirt and dust that you are vacuuming up stays secure, within the vacuum. But, it also ensures that the particles within the dirt and dust you are vacuuming up – particles such as germs and allergens – don’t enter your air once you dump the contents of the dust bin into the garbage. That way, your air is nice and clean.

One of the biggest flaws that the Tineco A10 Hero has, is the fact that it only gives you around ten-to-twenty-five minutes of battery-life. That’s not a lot, and most stick vacuums give you a bit more. But, the reason the battery-life is so low, is because this is such a powerful stick vacuum.

The Tineco A10 Hero is a fantastic stick vacuum that is powerful and very easy-to-use. But, the battery-life is somewhat annoying, since you will have to recharge the battery frequently.

The GOOVI Stick Vacuum weighs 6.6 pounds. It’s larger than the Tineco A10 Hero, but not by a lot. It also offers many of the same features, but the design is a little different.

When you are using the GOOVI Stick Vacuum, you have access to one-hour of battery-life. You don’t have to recharge the battery as frequently as you do with the Tineco A10 Hero.
If you are vacuuming in smaller spaces, with the press of a button you can turn the GOOVI Stick Vacuum into a handheld vacuum cleaner.

The Shark Rocket DuoClean HV382 weighs 9.9 pounds. It’s one of the larger stick vacuums on the market. But, while it is large, it’s also very powerful, and easy to use.

Shark has designed a stick vacuum that feels good to move around. It feels good, and this means that you’re not going to feel the same sense of weight and heft that many other stick vacuums give you.

Within the cleaner head of the Shark Rocket DuoClean HV382, there is a DuoClean Dual Brushroll. This brushroll is one of the best available, and it works on just about any surface. It glides across floors, and effortlessly pulls up dirt and dust, as well as large pieces of debris.

The DuoClean Dual Brushroll is paired with strong suction that the Shark Rocket DuoClean HV382 generates. This suction, combined with the brushroll, give you the freedom to vacuum on any surface almost effortlessly.

In the end, the Shark Rocket DuoClean HV382 is an expensive stick vacuum, and a little heavy, but it’s also one of the most powerful stick vacuums around!

Comparison Articles
Tineco A11 Hero vs. Hero+?
Tineco A10 vs. Tineco A11 vs. Dyson V10
The Difference between the Hero and the Master

The Eureka NES210 weighs four-pounds. If you look at the vacuum, you’ll notice that it is very slim, and there aren’t many features on the vacuum itself.

While you are using the Eureka NES210, you can swivel the cleaner head and move it into smaller areas. You can also turn it into a handheld vacuum.

Ultimately, the Eureka NES210 is designed for smaller messes and smaller spaces. It’s cheap and affordable, and it can be very useful for those smaller spaces and quick clean-ups!

Tineco A11 Hero
40min Run Time
5.5 lbs.
The A11 Hero is a high performance cordless vacuum featuring a 450W motor and up to 120W of suction power for deep, thorough cleaning on any floor surface.
Check Latest Price
Budget Option