In today’s world we are required to do so many things, so why wouldn’t we expect the same thing from our vacuums? Roborock’s latest contribution is exactly this. A hybrid robot vacuum and mop.

It would have been unheard of to leave a vacuum unattended with a full tank of water in the past; but this is the beauty of the Roborock S7. Once it senses carpet, it will automatically raise its mop to avoid it. It is smart enough to solve the long held problem we’ve had between vacuum cleaners, mops and water on carpets.

In a Nutshell
With a standardized, automatically vibrating mop bucket that lifts itself,
and an improved brush design, the Roborock S7 is an innovative addition to the market. When you combine these advanced features with a 2,500Pa motor, mapping and a range of customized options, it certainly makes it a value for money purchase.

Where is it Available and How Much Does it Cost?
Released on March 24, 2021, the Roborock S7 is available for purchase on Amazon for $649. It is only currently available in white, however there are plans to release a black model in June. They are also currently working on plans to release a compatible model with an auto-emptying dock for the Roborock S7 later in the year.

Roborock’s Design.
At face value, the Roborock S7 isn’t ground-breaking and could easily be confused with their S6 MaxV model; the only difference being the dual front cameras for that model. Both of these vacuums have the same diameters, being 13.8 inches by 13.9 inches, comparatively large sized models. When testing, the smaller bots, such as the Romba i7+, could fit easily underneath my dining room chairs; whereas these could not.

Having said that, the Roborock S7 has a much more aesthetic appeal than the earlier S6MaxV model, or the Romba i7+. With a sleek and shiny white plastic surrounding, complemented by a brushed silver trim at the top, it also features a raised disc in the center. This displays the Roborock logo and covers the Lidar sensor.

At the front of the vacuum, there are silver buttons for spot cleaning, as well as start/power cleaning and buttons for docking. At the rear of the machine is an orange button, which facilitates the release of water from the onboard tank.

There is nothing earth shattering about the aesthetics of the Roborock S7, however there are added features that give this model a premium bot model look, and indicate that there is a lot of power under the hood. The first is located near the centralized logo disc, and the concentric waves spread out, indicating the vibrating, sonic mop on the machine.

It also has a curved light that displays different colors, coinciding with movement; similar to the iRobot Roomba s9. Although the light is significantly smaller than the Romba s9, it does come equipped with a light that moves from right to left when it is in standard operating mode. The light alternates between black and green when it it is used for spot cleaning.

Underneath the Roborock S7, these aesthetic features continue, with a studded red brush roll lined with rubber situated in between the two comparatively large rubber wheels. According to Roborock, the brush is a ‘floating brush’, more easily able to reach the ground for a thorough clean. The brush housing is strong and moves easily.

To the left of the brush roll, there is a rubber brush with five spokes and a multitude of sensors line the edge; this includes a multi-directional sensor in the front of the wheel which detects carpet.

The slim, plastic hood disguises the dustbin and WIFI indicator light. Easily removable, the bin can be easily emptied and cleaned with running water. You don’t have to manually switch between the dustbin and water tank to change your cleaning tasks as it is completely separate from the water tank.

The RoboRock S7 is also distinct from other hybrid models as it is not necessary to lug a microfiber pad around. It has a sonic controlled mopping system with several scrubbing options which are available via a detachable mopping plate that is shaped like a half moon. It also has a microfiber pad that is reusable.

The bonus feature that is really impressive is that when the bot detects carpet, or is returning to the dock, the mop raises by 5 millimeters (or 0.197 inches). Roborock has named this its ‘VibraRise technology’, but I found it to be surprisingly consistent.

The Roborock S7’s Performance
Every-day dirt and grime is easily removed by the suction and sonic technology is employed to assist the mop to remove tough stains. Your carpet will not be effected by moisture from the mop as carpet is automatically detected.

The Roborock S7 has 2500Pa suction, exactly the same as the S6 MaxV mode. You are also able to choose between 4 different modes (quiet, balanced, turbo or maximum), with the intensity of the suction and noise increasing with each level. This also effects the life of the battery. It’s much better to at least have these options than not, and with all of the other customized settings, you are more in control of your cleaning device.

When using the Roborock S7 on the higher settings, we were highly impressed with the standard of cleaning. There’s mo guarantee that it will remove every last bit of dirt from your carpet, and it won’t replace your primary vacuum cleaner. The great thing about this machine, however, is that you won’t have to use it as frequently; something you will find standard for even the best performing robot vacuum cleaners that are currently on the market. It also comes with a rubberized brush (a first with this model), which should equate to a more thorough clean and much lower maintenance than some other models.

This bot does a fantastic job of steering itself around your home; avoiding and detecting obstacles, getting in to those hard to reach corners, and covering the entirety of your area. The robovac also provides voice feedback, which we really liked, so it will alert you when it is recharging, or returning to the dock, for example.

Compared to its predecessor, the biggest upgrade of the S7 is the standard of mopping. Guided by sonic brushing technology, this cleaner can apply up to 3,000 vibrations per minute, making previous models look much more inferior. These models also required you to manually switch between different cleaning modes, whereas the S7 automatically adjusts this for you during your clean.

When testing, we found the S7 to be far better at sonic mopping than vacuuming, even on ground-in spills and dirt. The settings on the Roborock S7 also allow it to readily move between rooms with a whole range of floor coverings, tiles or hard flooring; it will automatically detect what is required and adjust itself accordingly.

As with previous models, you still get the same standard Roborock settings. This includes options to nominate certain rooms for cleaning, rather than the whole floor, or elect for areas of rooms to remain untouched. The only thing it appears the S7 is not capable of doing is getting up and down the stairs by itself.

Why isn’t there am auto-empty bin?
Details are scant on a release date, however Roborock has announced that they are planning on producing an auto-emptying component to attach to the S7. The price of this has also not been released. Personally, I am sceptical about upkeep costs, so I’ll be interested to see if this station has a canister design, or disposable bags. Without an increase on the purchase price, or any additional costs, it will very likely be a great component to complement this machine.

Durability
Although this product is made with plastic, don’t be fooled into thinking it has no oomph. The plastic piece, which facilitates the back and forth vibrations and is attached to the mopping pad could be problematic. When I detached the velcro attachments, it appeared to be flimsy. Having said that, however, it does come with a 1-year warranty

Is there a better performer?
Indeed there is. As previously mentioned, for a reasonably comparable price, the Roborock S6 MaxV with its integrated camera system appears to be a better option. It is also effective with both mopping and vacuuming.

Should I buy it?
Why not? If you are uncomfortable with your privacy being invaded by a wandering vacuum cleaner with a camera on it, then the Roborock S7 is an ideal alternative. It is pretty much the same, only without the camera and an advanced mopping system.

To Sum Up
It was clear from our testing that the Roborock S7 is well equipped to handle all elements of floor cleaning. It is time efficient, cleans thoroughly and has definitely advanced its technology with the addition of the mopping system. This small change will hardly revolutionize mopping, but it will certainly make it a much more efficient process.

The only disadvantage to this otherwise solid model is the price. It at the higher end of Roborock’s range, with only the Roborock S6 MaxV (with camera recognition) more expensive. Personally, the added features of the S6Max’s intelligent camera system is a game changer for me, and I’m not convinced I would choose the S7 when for a little more, I could have live-streaming and obstacle avoidance. 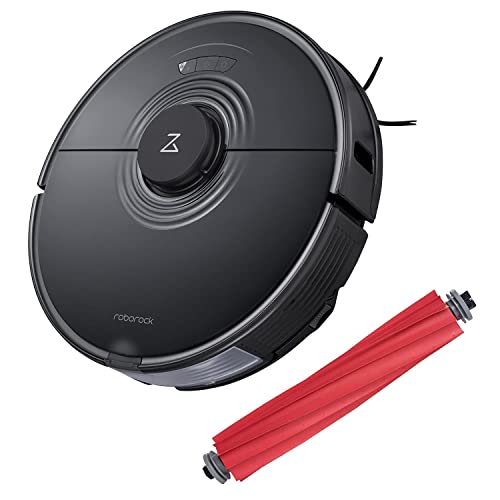