Using a single-speed pool pump gives you a single water pumping speed. There are no other speeds to choose from, and this means that, no matter what, the pump will always be using the maximum amount of power.

Using a dual-speed pool pump gives you two different water pumping speeds — usually, a low speed, and a high speed. Naturally, the high-speed uses all of the power that the pump can muster.

With a variable-speed pool pump, you have access to a wide variety of different pool pumping speeds. You can choose the exact speed you would like, and this allows you to, essentially, tailor the pumping speed to your exact specifications, while also making it easier to use less power.

Right away, you’re going to notice that the Pentair 342001 is much simpler than many of the other variable-speed pool pumps on the market. What makes it simpler than the others isn’t just the design, which isn’t that different, but the fact that setting it up is very easy.

Most of the time, setting up a variable-speed pool pump – especially if you’re replacing an older pump – requires a lot of rewiring. This can take time and, depending on if you’re paying someone to do this for you, a lot of money.

But, the Pentair 342001 doesn’t require you to do that. Instead, it has a very simple and concise setup, and you can use it with 115-volt power, or 230-volt power. Everything runs very smoothly, and the setup should only take around thirty-minutes to one-hour, at the most.

On the front of the Pentair 342001, there are a series of buttons, and a digital display. The digital display shows the amount of electric watts that are being used, so you have a good idea of the amount of electricity that the pump is using. It also shows a 24-hour clock and gives you data regarding the electric usage and speeds, based on those hours. Using the different buttons, you’re able to select the exact speed that you would like the Pentair 342001 to run at.

Ultimately, if you’re looking for a great variable-speed pool pump that is easy to set up, easy to use, quiet, durable, and powerful, then you can’t go wrong with the Pentair 342001!

What Does The Hayward SP2303VSP Have To Offer?

When you first look at the Hayward SP2303VSP, you’ll notice that it has a sleek design. It looks nice, and every little feature and facet is properly delineated, so you always know what to do, and how to do it. Having a nice, concise design is one of the most underrated features in a pool pump of any sort, and the Hayward SP2303VSP delivers.

Setting up the Hayward SP2303VSP is a very easy process. Just like the Pentair 342001, this variable-speed pool pump supports 115V and 230V connections. There’s no need for you to perform any complex and convoluted rewiring schemes. Instead, just find the right place to put it, plug the wires in, and that’s it, that’s all you need to do!

To use the Hayward SP2303VSP, there is a small digital console that’s on the top of the variable-speed pool pump. You can press these buttons to access the different speed settings, so that you can tailor the speed and energy usage to your exact needs. By looking at the digital display, you can see which settings are currently being used, and the amount of energy that is being used.

Ultimately, the Hayward SP2303VSP doesn’t offer too much that is distinct from the Pentair 342001. But, what it does offer is an excellent pool pumping experience. Setting the pump up is very easy, using it is effortless, and with the press of a few buttons, you’re able to adjust the pump speed to your exact settings.

If you’re looking for a great variable-speed pool pump that is simple, concise, easy to set up, powerful, and very energy efficient, then the Hayward SP2303VSP is a fantastic choice! But, be warned, it’s a little more expensive than the Pentair 342001. 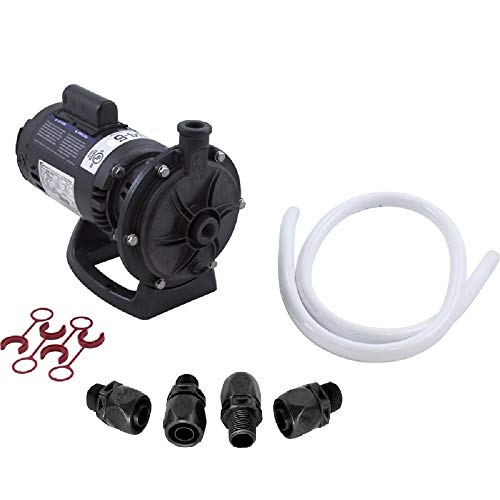