When you’re done washing those clothes, you’re going to need some way to dry them. Many people dry them outside in the sun. But, there are a lot of people who live in places where that kind of thing just isn’t a possibility. Sometimes, it’s because the weather is too cold for drying to take place quickly. Sometimes, there’s too much rain. And, sometimes, the weather is just too unpredictable.

That’s why a lot of people use dryers. A great dryer is a great companion to a great washing machine. When you have both of those machines, you can wash your clothes so that they look and smell great, and then you’re able to dry them so that they’re no longer wet, while also preventing the growth of mold and mildew.

Here’s the problem, though: a lot of people live in small homes. Small homes that can only have a washing machine, or a dryer; not both. This can be very tricky, because you want to have both of those machines, but there simply isn’t the space for it.

Since most people aren’t fond of going to the laundromat whenever they need to dry their clothing, they want to have a washer and dryer, but they aren’t sure how.

In this buying guide, you are going to learn all about the LG WM3997HWA Steam Washer/Dryer Combination. This is an excellent steam washer/dryer combination that gives you quality, performance, and ease-of-use, all in one nice package.

What Does The LG WM3997HWA Steam Washer/Dryer Combination Offer?

Within the machine, there is a tub that is 4.3 cubic feet. For a washer/dryer combination, that’s a good amount of space. You can put a lot of clothing within that tub.

During the washing process, you’re not going to hear a lot of vibrating or banging around, since the LG WM3997HWA uses the TrueBalance Anti-Vibration System. This is a system that prevents those vibration noises that you often hear during the washing and drying process – especially older washing machines/dryers. If you live in a smaller home, then this is a very useful feature that allows you to have a more peaceful time washing your clothes.

The LG WM3997HWA uses TurboWash Technology. Essentially, TurboWash Technology is a technology that makes the process of washing your laundry a bit quicker, and a lot more efficient. When it comes to how long the entire process of washing and drying your clothing takes, it’ll be around three hours, with a full load. Two of those hours have to do with the drying, which is thorough, and the first hour is for the washing, which is fast and thorough.

Many washing machines and dryers require some form of external venting. There’s a lot of air that is being produced, during the washing and drying process, and that air needs to go out somewhere. But, unlike many other washers and dryers, the LG WM3997HWA requires no external venting, making things a little easier if you live in a small place within an external venting source.

In the end, the LG WM3997HWA is a fantastic washer/dryer combo that works very well, and is great for smaller homes!

The Splendide WD2100XC is a great washer/dryer combo that is smaller than the LG WM3997HWA, and, therefore, better if you live in a smaller home where there is less space.

With a smaller size, there comes less weight. Unlike the 205 pounds that the LG WM3997HWA weighs, the Splendide WD2100XC weighs only 145 pounds. It’s very heavy, but it’s a little easier to move it into your home, compared the LG WM3997HWA.

In terms of the capacity, the Splendide WD2100XC gives you a washing capacity of fifteen pounds. That’s a decent amount of capacity, and you can put quite a few articles of clothing into the washing machine. For drying, though, the capacity is eleven-pounds, since drying requires a little more open space.

In the end, if you want a relatively inexpensive, easy-to-use, and well-designed washer/dryer combination, the Splendide WD2100XC is a good choice.

If you liked the Splendide WD2100XC, or thought it sounded like a pretty good washing machine, then the Splendide WDC7100XC is a great choice. It doesn’t offer that much more, in terms of washing and drying capabilities, but it is a little faster, and it’s also quieter, as well.

Using the LG WM3488HS, you have access to a total capacity of 2.3 cubic feet. That’s not as much as the 4.3 cubic-feet you’ll find on the LG WM3997HWA, but it’s still a decent amount. You can fill up that space with many articles of clothing, and then you can wash and dry them in a cycle of around three-hours, give or take.

Ultimately, though, the LG WM3488HS is a great purchase if you liked what the LG WM3997HWA had to offer, but it was just too big for your space. With the LG WM3488HS, you have a smaller washer/dryer combination that you’ll have an easier time putting in your home. 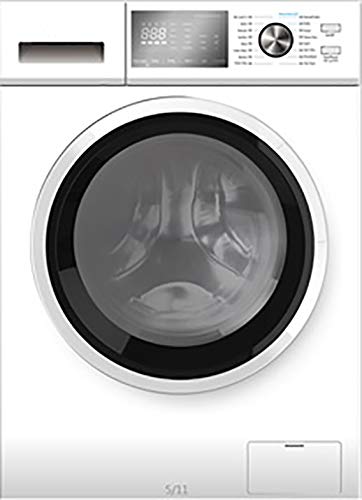