Stationary vacuums are unique. Most vacuum cleaners rely on you moving them around, to all of the different spaces and areas that need to be vacuumed. But, a stationary vacuum is, in many ways, the exact opposite.

For many people, stationary vacuums aren’t the most appealing vacuuming devices. Simply because they don’t give you a lot of mobility. If you don’t need to perform any particularly elaborate vacuumings, then a stationary vacuum can be a great choice. Especially if you live in a smaller home, where there isn’t that much space to store, or move, a bigger vacuum.

If a stationary vacuum sounds like it would be a good choice for you, then this guide is the right place to be! In this buying guide, you’re going to learn about three great stationary vacuums.

What Are The Features Of The EyeVac PRO?

You can use this stationary vacuum to remove a wide variety of different materials. Things like dirt, dust, soil, hair, and food crumbs, along with various other materials, can be picked up and removed by the EyeVac PRO with tremendous ease.

To use the EyeVac PRO, you just need to sweep all of the different things that you want to vacuum into a small space underneath the stationary vacuum. This small space has an infrared sensor right on the front, and this sensor detects when you’ve swept anything past it. When it detects something, the vacuum starts to work and sucks up everything you’ve swept past the sensor.

When this happens, all of the dirt, dust, and debris that is being vacuumed up flows into a canister. This canister can hold 4.8 liters of dirt, dust, and debris. When you’ve finished vacuuming, it’s super easy for you to unplug the stationary vacuum, take out the canister, and then dispose of what’s inside of it.

If you’re looking for a nice stationary vacuum that is affordable, easy to use, and great for businesses and commercial purposes, then the EyeVac PRO is easily one of the best stationary vacuums that you can purchase!

What Are The Features Of The EyeVac Pet?

Just as the title implies, the EyeVac Pet is a stationary vacuum that is designed for pets. More specifically, it’s designed to pick up the various materials that pets often leave behind. These are things like pet hair, litter, as well as dirt, and dust. But, pet hair, in particular, will be the material that is picked up the most by this stationary vacuum.

All of the suction is supplied by a 1400W motor. While this motor isn’t any more powerful than the motor of the EyeVac PRO, it’s still very powerful. And, you can easily vacuum up all kinds of different messes with the EyeVac Pet, due to the 1400W motor.

Many stationary vacuums don’t have this kind of filtration system, and not having this type of system makes it more difficult for the vacuum to adequately remove things like pet hair and fur.

When everything passes through the filtration system, it flows into a canister that holds 4.8 liters of dirt, dust, debris, pet hair, and litter. This canister is the same size as the EyeVac PRO.

In the end, there aren’t too many significant differences between the EyeVac Pet and the EyeVac PRO. But, if you have pets, and you want to have an easy and efficient way of cleaning up after those pets, then the EyeVac Pet is one of the best stationary vacuums you can purchase!

What Are The Features Of The EyeVac Home?

One of the biggest differences between the EyeVac Home and the two other stationary vacuums that we’ve looked at is the fact that the EyeVac Home gives you 1000W of suction power, instead of 1400W.

This does make a difference. Not a huge difference, but it does make vacuuming up certain kinds of materials a bit more difficult, and it means that the vacuuming process can be a little slower, overall.

With that being said, though, if you are using the EyeVac Home for simple cleaning and vacuuming tasks, then this amount of suction power shouldn’t be a problem. For more intensive vacuuming, then having 1000W may not be enough.

To use the EyeVac Home, you need to set it up in the room that you want it in, and then you just need to plug it in. By doing this, you will activate the infra-red sensor, which is by the front of the vacuum.

When you sweep anything past that little front entry-point, it will activate the sensor, and the sensor will tell the vacuum to begin sucking everything up. It’s a simple and concise system that is the same as the previous two EyeVac stationary vacuums. There’s nothing new about it, and nothing complex about it, either.

In the end, the EyeVac Home is a very well-designed stationary vacuum. It’s simple, has a great aesthetic design, is very easy to use, and gives you plenty of suction power for most vacuuming tasks. While it may not be the most effective or efficient stationary vacuum cleaner on the market, it gives you enough vacuuming power for small messes and some bigger messes.

If you’re looking for a stationary vacuum that you can use for the small, and sometimes big, messes in your home, then the EyeVac Home is easily one of the best purchases that you can make!

A stationary vacuum is a vacuum that can be placed in the corner of your room and this vacuum type is also known as an electric dustpan or automatic dustpan. 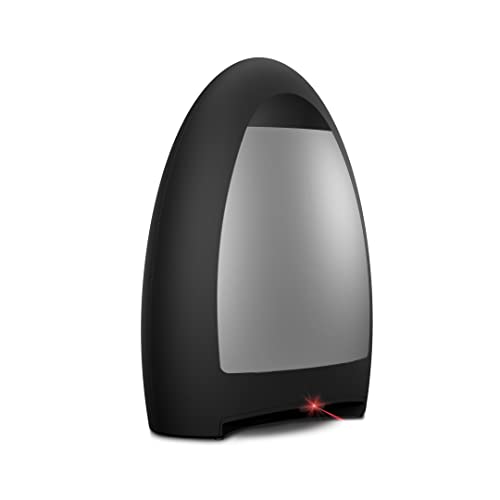